Poli often gives simple advice on basic safety tips to those willing to listen, and he often makes the plans on a mission. • Amber ( Korean: 엠버; RR: embeo) – (voiced by Rebecca Soler) A pink and white ambulance van. Wise and clever, Amber provides clues to solutions in situations using her ample knowledge and quick judgment when the rescue team is in trouble.

She protects the lives of friends with robocar poli characters medical tools and takes responsibility for safety accidents in daily life.

Amber is knowledgeable in caring for plants and animals as well as people and vehicles, but she also has comparable computer skills. Amber was given a slight cosmetic change in Season 3, replacing the red cross on her lightbar with a red letter A.

She is The Friendliest Ambulance of All-Time. • Roy ( Korean: 로이; RR: loi) – A red and yellow fire truck. Roy is very big and strong. He calmly and reliably solves problems in any rescue situation and is responsible for fire and electrical safety problems in the village. Roy uses a series of alternate attachments that include a crane arm, a portable hoist usable in robot mode, and a cherry picker in addition to his usual ladder. He also pulls much of the trailers the team uses on their missions.

Additionally, he is physically the most powerful member of the team and carries a fire hose that sprays anything that can flow in a stream-like form. • Helly ( Korean: 헬리; RR: helli) – (voiced by Kate Bristol) [4] A green and yellow helicopter flying through the sky. Armed with a positive and quick witted personality, he livens up the entire rescue team. He is supposedly the youngest member of the Brooms Town Rescue Team. His high performance search and information transmission abilities make him the messenger of choice of the rescue team.

Helly uses his robot form more often than the others, as he has very few alternative ways to move on the ground. He also uses many special tools and equipment in his work. Parts of his legs were recolored in Season 3, as they a notably more grey in color. • Jin ( Korean: 진; RR: jin) – The leader of the rescue squad and she wears orange and yellow clothes. Unlike the other members of the team, she is a human being rather than a machine; she is an inventor, having made several that have help the team, though not all of them have been considered successes.

Mountain Rescue Team The Mountain Rescue Team are a trio of three members who come from the neighboring town of Treasureville. They were introduced in Season 4. • Carry ( Korean: 캐리; RR: kaeli) – A dark blue aircraft modelled on a Bell Boeing V-22 Osprey.

He is the strongest member of the Mountain Rescue Team, and often helps the Broomstown Rescue Team when in need. • Mark ( Korean: 마크; RR: makeu) – An orange pickup truck resembling a Kia Bongo. He always supports The Rescue Team during missions along with his best friend Bucky. He was introduced in Season 4. 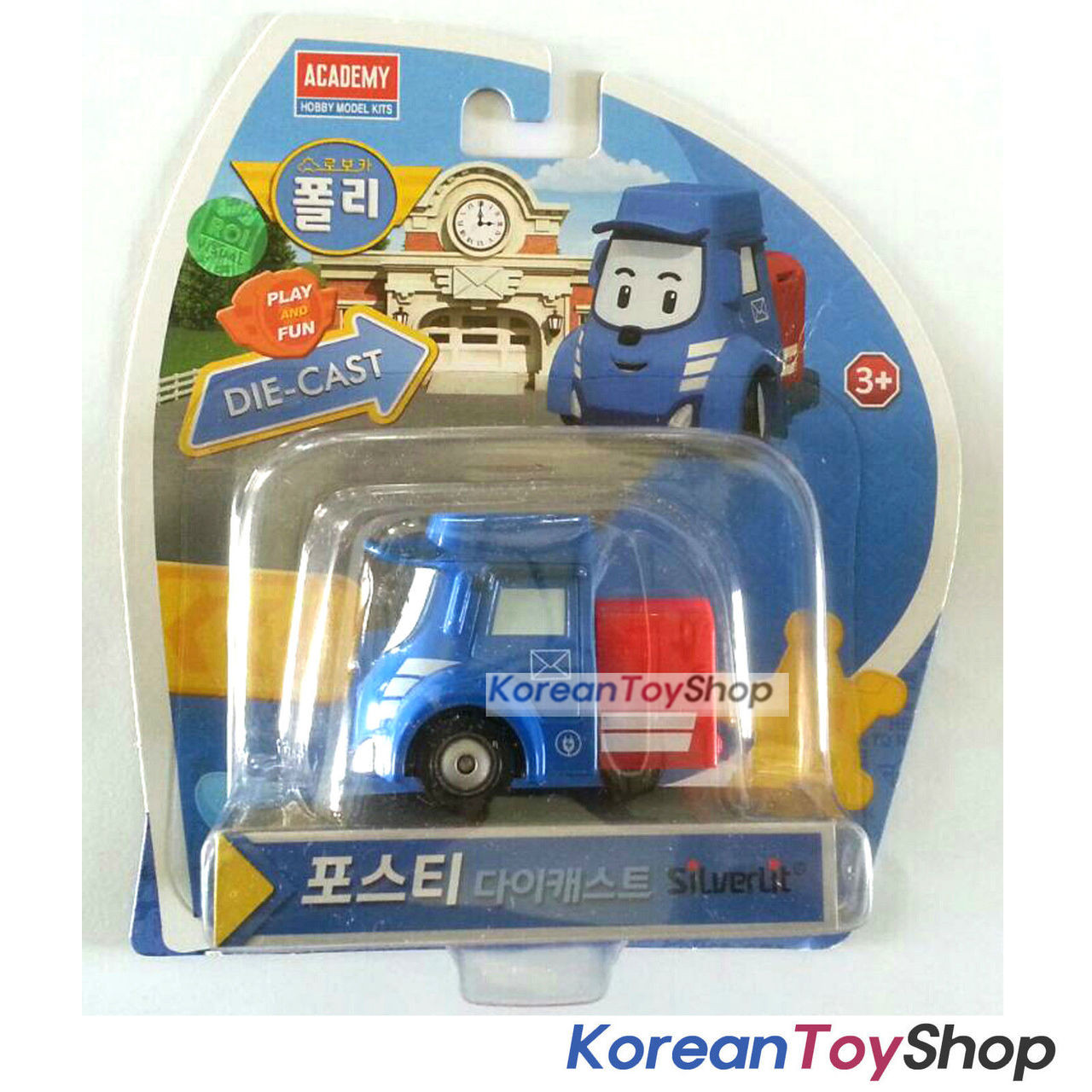 • Bucky ( Korean: 버키; RR: beoki) – A yellow tow truck (just like Spooky) who is a member of the Mountain Rescue Team. He is best friends with Mark and The Rescue Team and Jin. He also helps The Rescue Team too. He was introduced in Season 4. 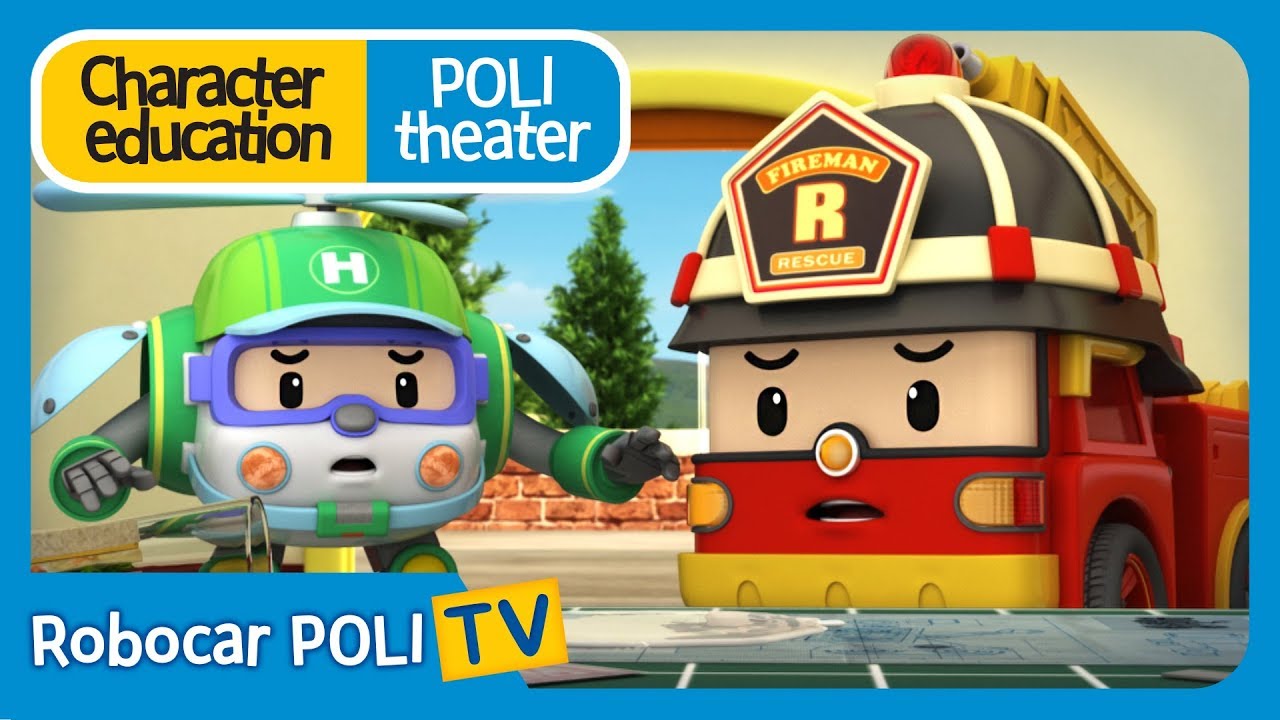 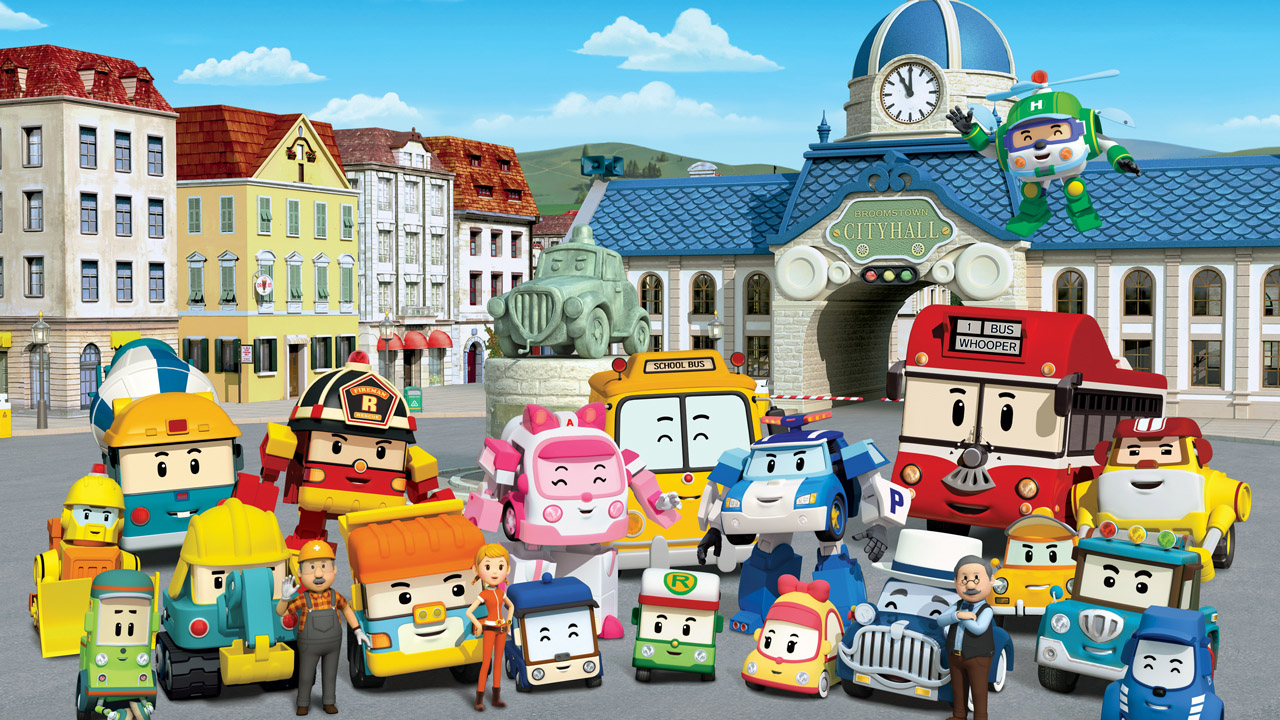 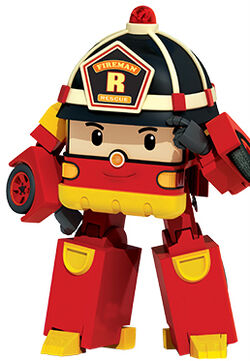 Cindy is good at studying and sports. She is prim and very decisive. She is also Peter, Johnny, and Charles' classmate. • Monica ( Korean: 모니카; RR: monika) – (voiced by Eileen Stevens), Cindy's mother.

He is more quiet and timid than his other friends. • Tommy ( Korean: 토미; RR: tomi) – (voiced by Jimmy Zoppi), A firefighter. He doesn't live in Broom's Town.

Villains • Truck-X ( Korean: 트럭 X; RR: teuleog-X) – A kidnapper truck, who has been disguising himself as all kinds of trucks (such as a toy delivery truck), he only appeared in Brave Mr. Musty. He tricked Mini and her friends by being a toy delivery truck, and kidnapped them, but got caught and arrested by Poli and his teammates. • Poacher ( Korean: 포처; RR: pocheo) – A hunter jeep, who has been hunting for animals.

In his only appearance in Move Out! Battle in the Woods, Poacher hunted the deer, but got caught and arrested by the Robocar poli characters Town rescue team and a mountain rescue team. • James ( Korean: 제임스; RR: jeimseu) – A stranger, who has been up to no good, he only appeared in Don't Go with Strangers. He tricked Peter and Johnny by being an ice cream man, and kidnapped Peter, when they mentioned the rescue team, but got caught and arrested by Poli, when Johnny called for help.

Other Characters • Annie ( Korean: 애니; RR: aeni) – She is best friends with Mary. She likes to hangout with her, But only on occasions. • Andy - He is best friends with Mary, Tim, Toby, and Annie. • Benny ( Korean: 베니; RR: beni) – A Hyundai Porter who is nice, neat and very frantic. He likes to hang out with his best robocar poli characters, Mini and Rody.

• Betty ( Korean: 베티; RR: beti) – She is Mr. Wheeler's granddaughter, who lives in a different country. • Bruner ( Korean: 브루너; RR: beuluneo) – A yellow backhoe loader who is a member of The Construction Team. However, he looks more robocar poli characters a robot than a backhoe loader. He is also the big cousin of Bruny. • Bruny ( Korean: 브루니; RR: beuluni) – A yellow loader who is the little cousin of Bruner. 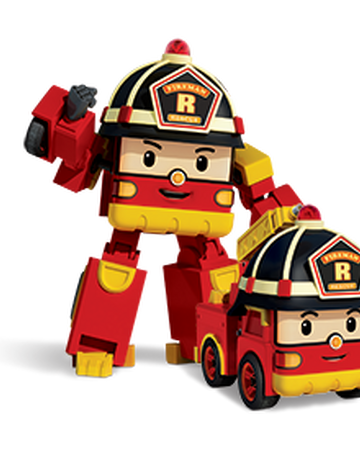 He is also too young to be a member of The Construction Team. • Camp ( Korean: 캠프; RR: kaempeu) – A cyan recreational vehicle who is a camper, He always has been camping in the woods since when he was little.

He was mean and nasty, but for now, he is now friends with Poli and his teammates. • Cap ( Korean: 캡; RR: kaeb) – An orange taxi who is best friends with Posty.

But sometimes they argue at each other, Although they both stay the same. • Cici ( Korean: 씨씨; RR: ssissi) – A robocar poli characters ship who works at the Harbour. She is a member of the Harbour Team and is friends with Lefy, Leky, and Lety. 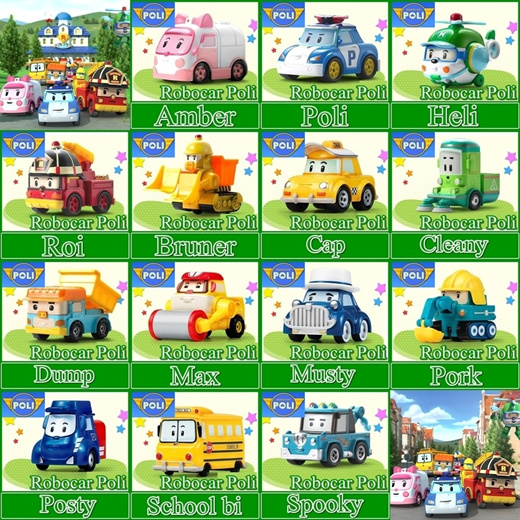 • Cleany ( Korean: 클리니; RR: keullini) – A green street sweeper who is sometimes clumsy, But is good with his friends and his job as cleaning all over Broom's Town. • Daisy • Dumpoo ( Korean: 덤푸; RR: deompu) – A dump truck who is the leader of The Construction Team, He is also best friends with Titan.

• Jessie robocar poli characters Korean: 제시; RR: jesi) – She wears glasses, and likes to go for a walk with her mom. • Lefy, Leky, and Lety ( Korean: 레키, 레티, 레피; RR: leki, leti, lepi) – A trio of three cranes who are part of The Harbor Team. 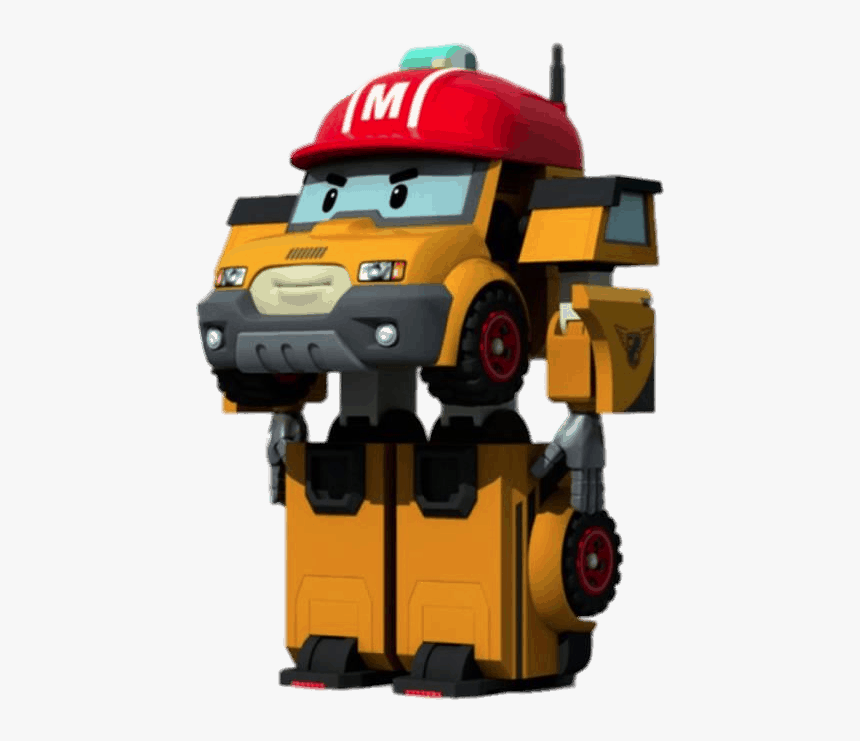 She is best friends with Rody and Benny and the granddaughter of Musty. • Mr. Builder ( Korean: 빌더; RR: bildeo) – The master of The Construction Team. He tough and short tempered and often shouts at them. • Mr. Wheeler ( Korean: 휠러; RR: hwilleo) – The store clerk of Brooms Town. He is sometimes snobbish, sarcastic and narcissistic, But he is good to Jin and The Rescue Team for his commands and actions. He is also Betty's grandfather. • Ms. Belle ( Korean: 벨르; RR: belleu) – She is the harbor master.

• Musty ( Korean: 머스티; RR: meoseuti) – A navy Lincoln Mark VIII who is elderly, loyal and calm. He is the mayor of Brooms Town and is the grandfather of Mini. • Poke ( Korean: 포크; RR: pokeu) – An excavator who is a member of The Construction Team. Unlike the rest of the characters, he doesn't talk (although he does mumble).

• Robocar poli characters ( Korean: 포스티; RR: poseuti) – A mail auto rickshaw on three wheels who is a cheap, spectacular and vehicle. She is best friends with Cap and her job is delivering mail.

She is a Piaggio Ape. • Rody ( Korean: 로디; RR: lodi) – (voiced by Sarah Natochenny), A Hyundai Porter who is cool, selfish and mean.

But he is good to his friends, Mini and Benny. • Ryan ( Korean: 라이언; RR: laieon) – He wears glasses, he has been writing thank you, now he's learned to write someone's address, and a return address. • Sam ( Korean: 샘; RR: sam) – Annie and Mary's first classmate.

• School B ( Korean: 스쿨비; RR: seukulbi) – A School bus who is robocar poli characters a teacher to the kids and always make good deeds and starts dropping off and picking up kids from school. • Spooky ( Korean: 스푸키; RR: seupuki) – A tow truck (specifically a 'boom' truck) who is mischievous, stubborn and timid, But he is robocar poli characters helpful and is a good friend to The Rescue Team.

• Stacy ( Korean: 스테이시; RR: seuteisi) – The owner of the battery recharger station. She has brown hair and wears a dark-magenta outfit. • Terry ( Korean: 팀; RR: tim) – A container semi tractor who is the leader of The Harbor Team and is a loyal friend to the crane triplets and is best friends with Lifty. • Tim ( Korean: 샘; RR: Sam) – Annie and Mary's second classmate. • Titan ( Korean: 타이탄; RR: taitan) – A large dump truck who is best friends with Dumpoo.

And a member of The Construction Team. • Toby ( Korean: 토비; RR: tobi) – Annie and Mary's third classmate. • Tracky ( Korean: 트랙키; RR: teulaegki) – A tractor who is a farmer who works in a barnyard with a farm.

Production While in production, this series was selected for the section of full-length animation at Global Animation Project 2009 hosted by Korea Creative Content Agency (KOCCA), under the title of PiyoPiyo Friends. [1] Broadcast In the latter half of 2011, the films were exported from South Korea to France.

Internationally, the program currently airs on French and Taiwanese channels. The series aired in Japan on TV Tokyo between April 6, 2013 and September 24, 2014. [5] Also aired in South Korea channel on Tooniverse.

An English dub of Robocar Poli airs in American on Okto. [6] In Canada, it debuted on Treehouse TV on January 6, 2018, While in French Canada, the series premiered on Télé-Québec and Teletoon on June 28, 2020. [7] It is also available on Netflix and YouTube. [8] [9] A separate British dub of the series began airing on Nick Jr. Too in the UK starting February 27, 2017.

Related merchandise includes cakes, [11] toys, [12] books, and apparel. In South Korea, Poli is frequently called 폴총리 ( Pol-chong-ri) which means "Poli, the Minister of Children". [13] This follows Pororo which is famously known as 뽀통령 ( Po-tong-ryeong), meaning "Pororo, the President of Children".

As part of Hyundai Motors' global corporate social responsibility project with RoiVisual and EBS, the series was produced to educate children on the importance of traffic safety, [17] and has aired for two seasons. The first season of the spin-off was shown as six 11-minute episodes, each with two segments. In Singapore, it debuted on Okto on December 27, 2015. 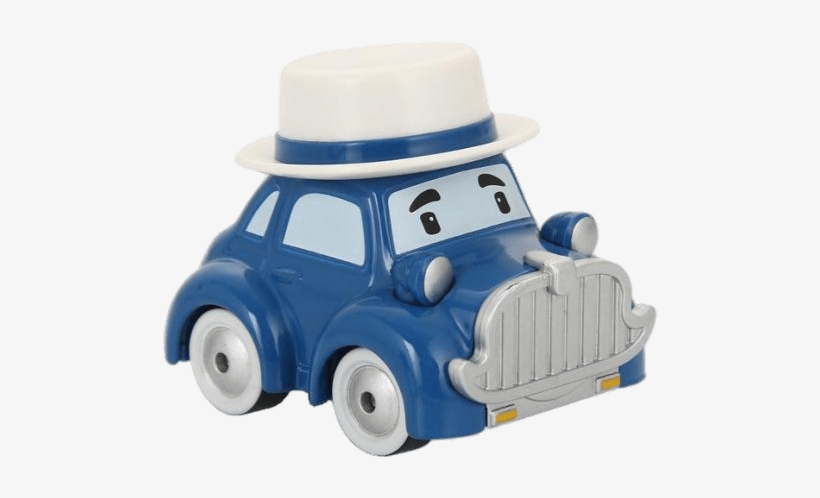 Centered on Rescue team, it debuted in July 2020 on EBS. It comprises 25 popular nursery rhymes and 1 creative song in 26 episodes. References • ^ a b " 'Global Animation Project 2009' kicks off". Retrieved 19 March 2013. For the section of full-length animation, two works such as 'the Hen that Went outside the Yard (MK Pictures) and PiyoPiyo Friends (Roivisual) have been chosen. 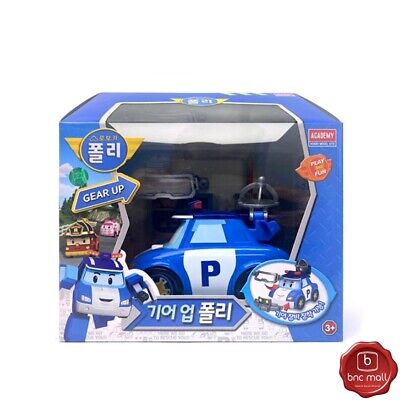 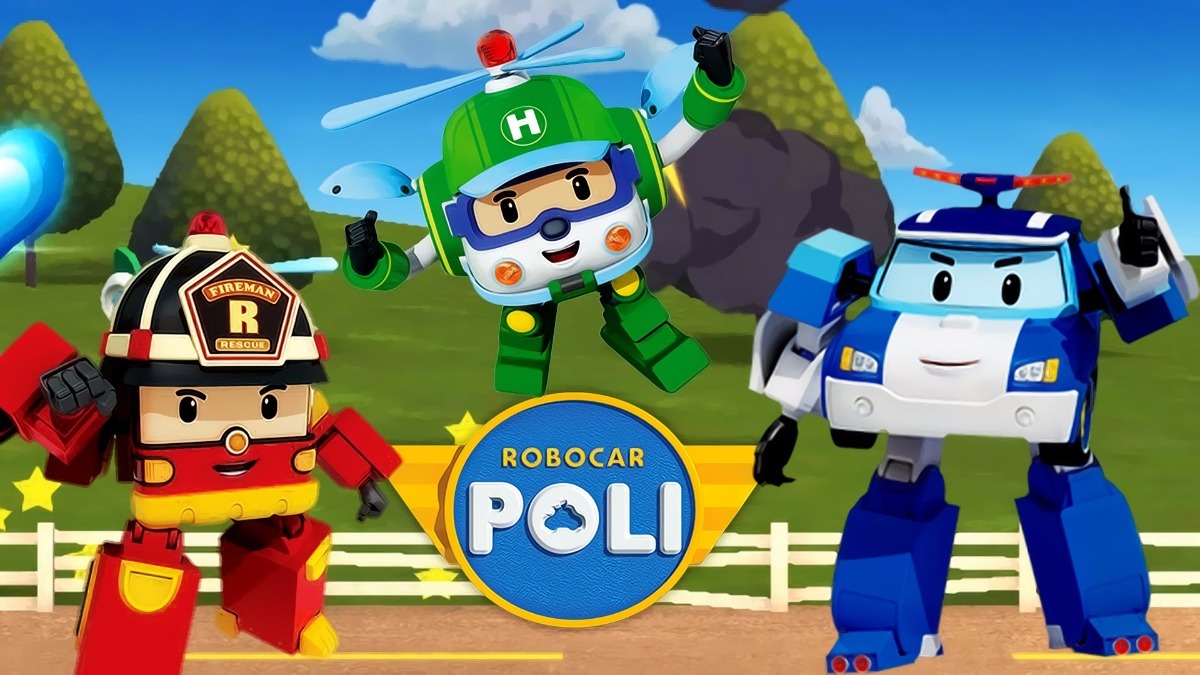